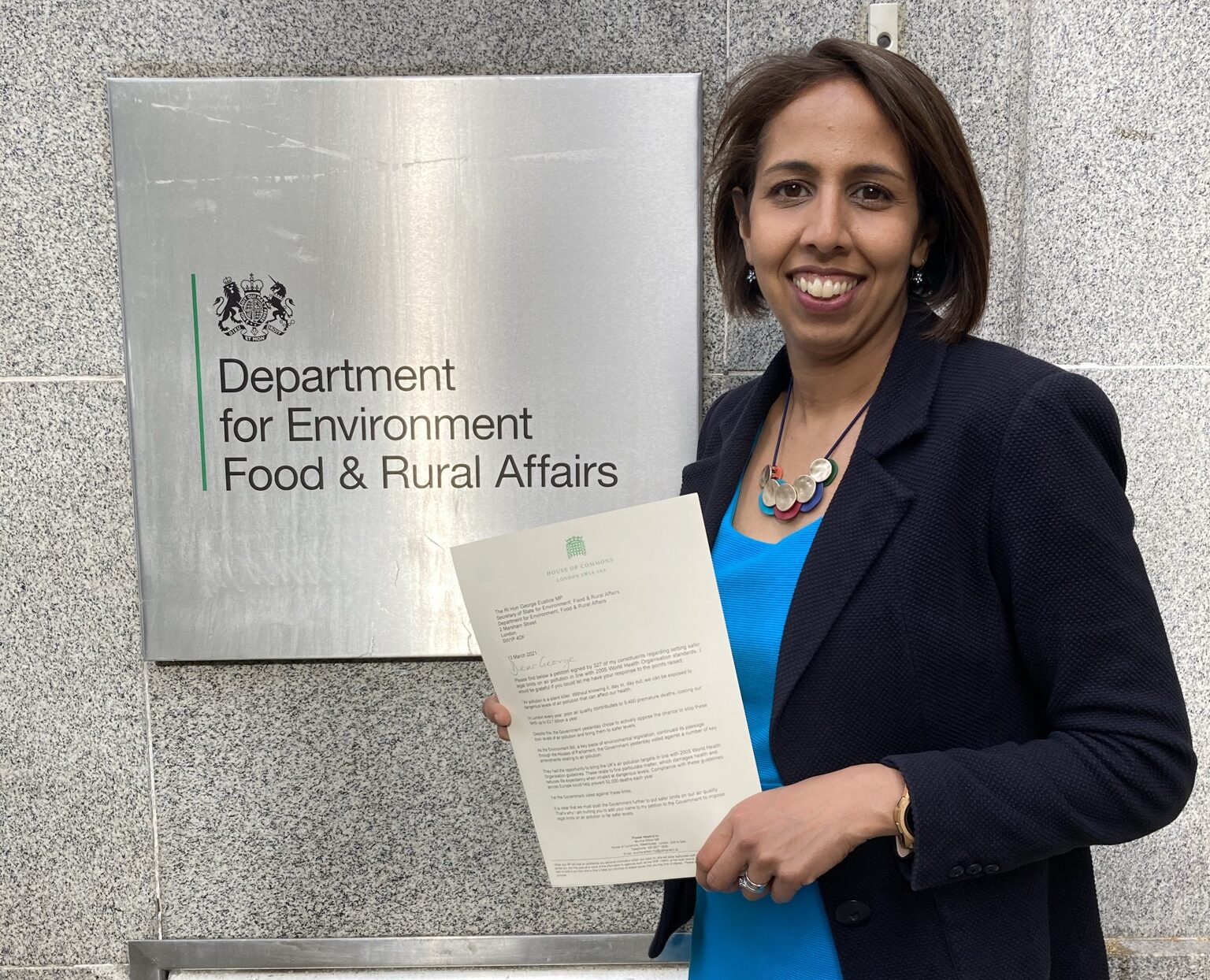 Munira today handed in a petition on behalf of 327 local residents that called on the Government to take urgent action to tackle toxic air.

The petition forms part of a campaign led by Munira urging the Government to put safer legal limits on air pollution, in line with World Health Organisation guidelines.

Following the support of hundreds of local residents signing her petition, Munira also led a debate in Parliament on air pollution in London where she called on the Government to take the dangers of air pollution more seriously.

Following her handing the petition into the Government, Munira said:

The legal limits we have on air pollution are not up to scratch, yet this Conservative Government has been too slow to act. That’s why my petition, backed by hundreds of local residents, is calling for safer limits to help protect our communities.

Although I’ve now delivered petition this petition to the Government, this campaign is far from over. I will continue to represent the views of my local residents in fighting for action on air pollution so that everyone has access to clean air.”

The full petition that was signed by 327 local residents can be found here.

The text of the petition that was sent to the Secretary of State for Environment, Food and Rural Affairs is as follows:

Please find below a petition signed by 327 of my constituents regarding setting safer legal limits on air pollution in line with 2005 World Health Organisation standards. I would be grateful if you could let me have your response to the points raised:

“Air pollution is a silent killer. Without knowing it, day in, day out, we can be exposed to dangerous levels of air pollution that can affect our health.

In London every year, poor air quality contributes to 9,400 premature deaths, costing our NHS up to £3.7 billion a year.

Despite this, the Government yesterday chose to actively oppose the chance to stop these toxic levels of air pollution and bring them to safer levels.

As the Environment Bill, a key piece of environmental legislation, continued its passage through the Houses of Parliament, the Government yesterday voted against a number of key amendments relating to air pollution.

They had the opportunity to bring the UK’s air pollution targets in line with 2005 World Health Organisation guidelines. These relate to fine particulate matter, which damages health and reduces life expectancy when inhaled at dangerous levels. Compliance with these guidelines across Europe could help prevent 52,000 deaths each year.

Yet the Government voted against these limits.

It is clear that we must push the Government further to put safer limits on our air quality. That’s why I am inviting you to add your name to my petition to the Government to impose legal limits on air pollution to far safer levels.

Will you lend your support to cleaner air? Sign the petition below.”

Please find the enclosed signatories on the page overleaf.