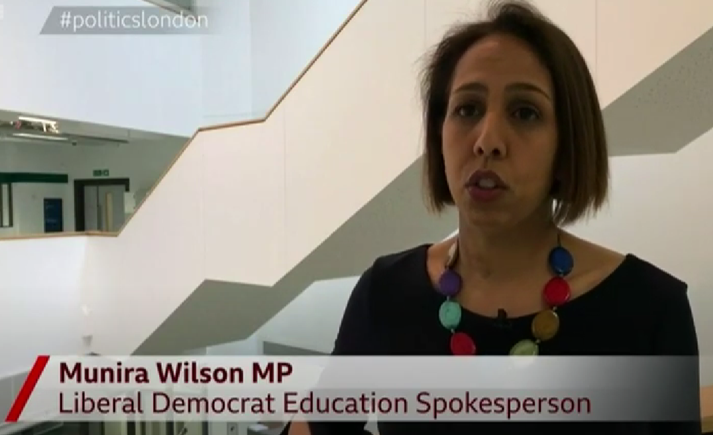 Our children are facing a reading crisis. In Parliament and on BBC Politics, Munira called on the Government to guarantee more funding to catch up on lost learning.

In Parliament and in an interview with the BBC last week, Munira called on the Government to guarantee more funding to help our children catch up on lost learning.

Recent data has shown that, shockingly, more than one in four children left primary school without reaching the appropriate reading age pre-pandemic. These figures will undoubtedly be worse post-pandemic, particularly in disadvantaged areas.

In response, Munira raised a question in Parliament on 14 March, in which she demanded an urgent review into reading standards post-Covid, and called on the Government to commit to a Children’s Catch Up Fund of at least £15bn, which was recommended by the Government’s own advisor.

Munira and the Liberal Democrats are also calling for catch-up vouchers for parents to spend as they see fit. This would include £200 of catch-up vouchers for every child, and more for those on free school meals or with special needs. These could be used for tutoring, extra-curricular activities or counselling, as every child’s needs are different.

“Covid has hit our children’s education hard, with school closures and disruptions making the reading crisis even worse than it already was,” says Munira. “We need a massive investment to help kids catch up on lost learning, instead of the pitiful £50 per child the Government has offered so far.”

“Clearly we had to put public health first during the pandemic, but that shouldn’t have been at the expense of our children’s futures,” adds Munira. “Sadly, the Government failed to properly plan for school closures and give schools the support they needed, and our children are paying the price.”

Munira spoke further about this crucial issue in an interview with BBC Politics London on 20 March, which also included an interview with Assal Ruse, Headteacher of Twickenham School – the first school in the borough to start giving remote lessons during the pandemic.

“Schools like Twickenham School defied the odds and went above and beyond, while the Government hasn’t gone nearly far enough,” Munira told the BBC.

Learn more about what Munira and the Liberal Democrats are calling for here.

Watch Munira’s challenge to the Education Secretary on 14 March: