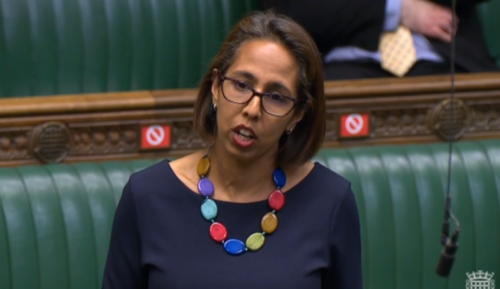 Today, Munira called on the Government to put ideology aside and extend the transition period for the UK’s departure from the EU.

The UK and EU have until 1st July to extend the transition period, which is set to expire at the end of this year.

Finding a new trade deal by this time is ambitious given the outstanding disagreements between both sides and lack of progress that has been made. There is a risk that if the transition period is not extended, the UK could crash out of the EU without a deal.

Munira calls on the Government to extend the transition period

Speaking in the House of Commons, Munira called on the Government to extend the transition period:

“The CBI says that coronavirus has left companies with almost zero resilience to a chaotic exit to the single market.

This is no longer about leave or remain. It’s about a Government acting responsibly in the interests of its citizens.

So will the Minister put ideology aside and persuade her colleagues it is time to seek an extension to the transition period?”

“…All that extending the transition process would do is push the negotiations out and we would be back to where the British people don’t want to be which is uncertainty and chaos.”

Munira’s Response to the Minister

“The Government say the British people don’t want uncertainty and chaos, yet crashing out of the EU without a deal would achieve just that.

Barnier has made it clear: not enough progress has been made on negotiations. We cannot afford to face a double whammy to our economy of exiting without a deal and dealing with the consequences of the Covid-19 pandemic. More jobs and lives would be put at risk.

To even entertain this possibility is reckless behaviour from the Government. The Government must put national interest ahead of Brexit ideology, and extend the transition period.”